I have lived in the city for most of my life and not once have I struggled to maneuver throughout the city. I have noticed that New York City is mainly built for people who are able bodied. Because of this, not everyone is taken into consideration when it comes to building a public space. For instance, the sidewalks throughout the city have many cracks in them; this can make it more difficult for people who rely on wheelchairs to travel. Public space should easily accessible to all people of different backgrounds, to ignore these groups of people would be to ignore their needs entirely. As an engaged resident of the city I should be obligated to be considerate of others and support them because their disability does not make them any less of a resident than I am.
When it comes to walking on the sidewalk, it can become irritating when others travel in a slower pace in front of you, with no way around them, you start to become impatient. Being considerate of others and their struggles with travel you can learn to be patient with their difference in travel pace. This attitude from able bodied people towards those with disabilities is a hidden aspect in social life that no one likes to admit. Becoming impatient and angry can make disabled individuals feel less of a person. This can also contribute to making them feel excluded from the community. 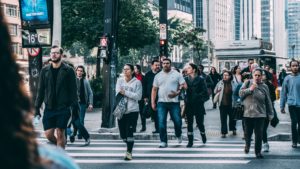 For able bodied people we tend to take traveling through a city space for granted. For the most part, we do not encounter as much of a struggle to maneuver than disabled people do. Having a city that caters to only a certain group of people does not help diversify the city. Instead it creates an imbalance in how the built environment affects people. When it begins to negatively affect the quality of life of those who cannot help their situation then the city and other residents need to implement change. We can begin by changing the way we see disabled individuals, in the text, The Neighborhood Is the Unit of Change by David Brooks, the author states social infrastructures such as libraries, “nurture relationships among people who check in on one another when crises hit.” Libraries tend to have a welcoming environment, if we begin to have a positive perception towards individuals with disabilities then we can begin to apply that welcoming environment to all spaces in the city. This will allow for a more social and diverse setting for people of all backgrounds.
In the case of the heat wave that occurred in Chicago in 1995, many people were reported to have died. According to The Neighborhood is The Unit of Change, the article refers to sociologist, Eric Klingenberg, who found the importance of neighborhood in times of crisis. Looking at the heat wave problem towards all the people in the neighborhood as opposed to how it affected one person allows for an understanding of the lack of interaction in the community as being the reason for so many deaths in North Lawndale. In comparison, South Lawndale had far less deaths because they had a more social community. As a result of an increase in social interaction, members of the community in North Lawndale would have checked in on each other and helped in any way that they could in this moment of crises. The importance of checking in on each other is rooted to the idea that we should be obligated to care for other members in our community because we all deserve equal care and acknowledgment. South Lawndale’s low death tally during the heat wave shows that social interaction does indeed prove to result in positive benefit within spaces. 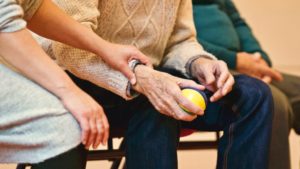 Excluding individuals who have disabilities in public spaces will not only divide people from each other, but it can also hinder our way of solving problems. Building an environment only for those we see as worthy prevents communities from learning what needs to be fixed and how to properly execute solutions. Avoiding and pushing away those in need contributes to the idea that only certain groups are meant to live in spaces that cater to their needs. This could be because people tend to choose who to invest their time and effort in. In the article The Use of Sidewalks: Contact by Jane Jacobs, she states that adults, “limit themselves to one or two friends, and no more.” Limiting who you care for in your community shares a parallel to what issues you care for the most. If most people in a community do not allow themselves to create friendships or at least share empathy to those disabled, then it may lead to lack of effort in trying to fix the built environment to include them too.
In a well-known restaurant located in a historic building in New York, there did not seem to be a handicap-friendly design to the exterior of the space. The restaurant has stated that they reached out to the city’s Landmarks Preservation Commission (LPC), to implement an exterior-stairwell hand rail. The restaurant has claimed that the LPC rejected their idea to include the handicap-friendly feature but the LPC countered stating they had never received such request in the first place, they stated that if they had they would have approved of it. The fact that it was considered by the restaurant to even add the design to their space is very considerate of them, it shows their acknowledgment of the needs other people in the city deserve. The LPC is just as obligated to go through with the implementation of installing the hand-rail because it is part of their job to do so. With that in mind it is a disappointment to know the design had not been ultimately added.
Much needed change to a historic building would be wise to do considering how many people visit such structures all throughout the city. Updating an old place would not only benefit the people who already struggle to move around the space, but it would allow for new comers to feel welcomed. With such change would also bring complications as stated previously with the restaurant and the LPC. The Accessibility Watch: Navigating New York’s Building Code, article states that anything built in the last twenty years and new projects should accommodate everyone equally. This will allow for a more comfortable experience for all those who live here and those who decide to visit the city. The article does not seem to believe that older buildings necessarily need these design updates. One can agree with this when you consider the complications it would bring to execute the slight renovation to make spaces friendlier. First off, the LPC would be conflicted with allowing the added design simply because it would tamper with the original look of said historic building. The cost would surely be high, making it less favorable to go through with. Leaving these buildings alone would be the easier way of handling this frustrating problem. When you look back on it one can argue if it is worth in the long run to not include the improvements. Leaving it alone and further make people who struggle to maneuver to remain in that state does not seem to be a wise choice. In the reality of it, going forward with just making it a standard to include these improvements in recent built structures and future buildings just seems to be the easier alternative in improving the built environment in New York City. 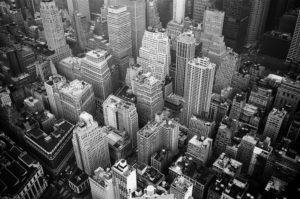 The diversity of New York is supported by how well the space makes people of different backgrounds feel welcomed. Despite this, the city does not make equal efforts to accommodate all groups of people in the city. For example, according to Metropolis New York does in fact pay attention to what people with disabilities need but they do not think it is worth the financial cost to invest in these improvements. This means that the city can bring change to specific populated areas, but they believe the “undue economic burden” outweighs the much-needed improvements. It shows the lack of care the city seems to have towards the people which contributes to the slowing down in progress towards change in the environment.
New York City has always been a diverse place and its environment constantly changes. Its public space has made many changes and will continue to make more in order to include everyone in all spaces. Disabled individuals exist, and we should not ignore them simply because we do not associate with them. Their membership in our communities make it so that it is our obligation to invest in helping them out. Considering their issues allow us to unite more as a community.

This entry is licensed under a Creative Commons Attribution-NonCommercial-ShareAlike 4.0 International license.

Need help with the Commons? Visit our
help page Send us a message

Built with WordPress Protected by Akismet Powered by CUNY